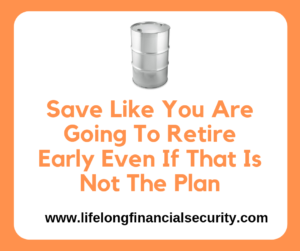 If you read this blog, you will see a lot of statistics about how people are not financially prepared for retirement.  So, that automatically means people are not on the path to retire early.

If you have a plan, great. But what happens when things don’t go according to plan? I just read an article about how everyone should be saving money like they are going to retire early. And I think that is some great advice.

“More than half of U.S. workers over age 50 are pushed out of long-held jobs before they choose to retire, according to a new analysis of Health and Retirement Study data by ProPublica and the Urban Institute, often resulting in irreparable financial harm that imperils their retirement and therefore the rest of their lives. Many never find work again, and those who do often have to take a massive pay cut or make other sacrifices that significantly diminish their quality of life. Only one in 10 ever matches their prior income before they were forced out.”

There is a lot of advice out there about working longer to make up for any retirement savings shortcomings you might have. I guess this could be a solution… albeit a sad one if you were looking forward to retirement. But what happens if you don’t have a choice about when you retire?

According to this data, the likelihood of being forced to retire early is 50%. And the vast majority of that 50% face a financial situation that destroys their retirement plans.

So, things might be far worse that I thought.

I feel there is a large number of people unprepared for retirement under normal circumstances, where they reach their desired retirement age. That leaves even less hope for the people who are forced to retire early.

Here is another quote from the article:

I’m all about creating a secure financial future. And that having to prioritize my investing and savings now, so I can have a future that is secure. There is no magic solution… it is a process.

Being able to retire early sounds great, right?  But I want to look at it from a different angle.

What if, instead of trying to retire early, we strive to create income streams we can do for a lifetime.  In this way, we never have to retire from our income generating activities.

This is a better representation of my plan.  You see, my wealth generating activities can be performed for a lifetime… because they are not physically strenuous or time consuming.

I don’t need to “retire”, because I can keep doing what I’m doing for the rest of my life (or at least as long as my brain holds out).

To Your Wealth,
Edward Lomax

What Is Financial Freedom?

How Long Does It Take To Learn Forex?

Forex Or Bitcoin – Which Is Better? 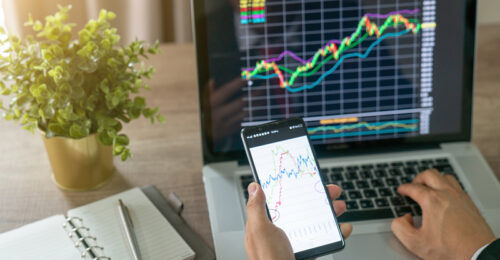 Types Of Forex Traders And How To Choose Wisely 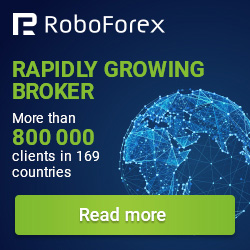